An altercation that began with a fight over a loose cigarette at a South Carolina sawmill and ended when a man almost died after he was shanked multiple times has resulted in an $800,000 settlement, the man’s attorney reports.

Attorney Tiffany Spann-Wilder of North Charleston reports that her client, Jamal Bryant, was working at Elliott Sawmilling in Estill in 2013 when he got into a fight with Denroy Grant after Bryant sold Grant a cigarette for $1. Grant later tried to undo the transaction,
even though he had already put the cigarette in his mouth.

“It appears in hindsight he didn’t want to pay more for it than he typically would, whatever the going rate was,” Spann-Wilder said.

According to Spann-Wilder’s report, the men came to blows and Grant shanked Bryant multiple times with an unidentified object. A weapon was never recovered, but Grant said in a statement to police that he picked up an instrument off of the floor of the sawmill when Bryant knocked him down.

Bryant suffered multiple stab wounds to the chest, back, and abdomen that required surgery to remove tissue from the lower lobe of his left lung, a suturing of a wound to the liver, and repair and resectioning of his stomach. He also suffered small bowel and colon punctures, which resulted in a resectioning of the small and large intestines, and his gallbladder was also

The workers compensation carrier denied the claim as a personal transaction.

The men had no prior relationship, and Grant had served 12 years in prison for voluntary manslaughter. Spann-Wilder contended that Grant snapped and brought “prison culture into the workplace.”

She said that the mill’s owners knew that Grant had been in prison prior to their hiring him, and that while it was good they gave him a chance, they did not implement any type of mentoring program or special supervision for him. The owners also placed him in an environment filled with dangerous instruments, she said.

Grant served almost five years in prison for assault and battery as a result of the incident.

Bryant sued Elliott Sawmilling under a theory of negligent hiring. He demanded $1 million, the full policy limits provided by the company’s insurer. During mediation, the parties came to an impasse at $500,000. The defense claimed that the employer had no liability because it was an intentional tort. Spann-Wilder said that she recalled reading an article that showed employers, did, indeed have liability because the incident happened on their property.

With that in hand, the parties settled for $800,000. Bryant “was willing to settle rather than to go on for a few more months and roll the dice with the jury,” Spann-Wilder said.

Bill O’Neil and J. Blanton O’Neall of Hood Law Firm in Charleston represented Elliott Sawmilling. Attorneys for the firm did not respond for a request for comment.

Tiawan Eurie was heading to work about the same time that Steven Keavney walked away from a Summerville bar called Shooters and got behind the wheel of his car, according to a lawsuit that recently settled for more than $1 million.

After their vehicles collided on a Dorchester County road, Eurie accused bartenders at Shooters of overserving Keavney. His blood alcohol level was measured at .178, which is more than twice the legal limit, two and half hours after the crash. 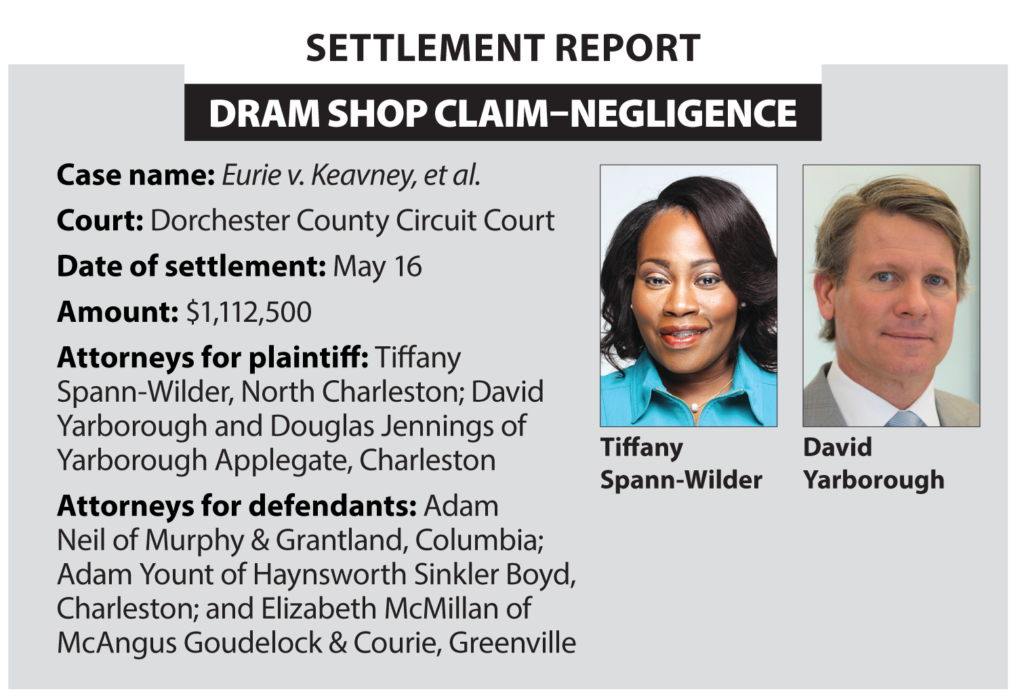 Eurie’s attorneys, Tiffany Spann-Wilder, who has an eponymous practice in North Charleston, and David Yarborough Jr. of Yarborough Applegate in Charleston, said their toxicology expert determined that Keavney’s alcohol level was at least .278 while he was at the bar.

Based on that level of intoxication, Yarborough said, it should have been obvious to the bar staff that Keavney was in no condition to drive.

Keavney pleaded guilty to DUI and admitted responsibility for the crash, which left Eurie with a fractured femur, broken hand, facial lacerations, $94,000 in medical bills and $13,800 in lost wages, according to Yarborough.

Keavney said he’d gone to Shooters twice on the day of the incident. He had a receipt from the first visit, which was around noon, but said he paid cash for the second tab, which covered about four or five hours of heavy drinking. He had a passenger during the crash who corroborated his story.

The bar staff confirmed that Keavney came in during the early afternoon and had a few beers, but denied that he returned later, Yarborough said. He added that the bar does not have a video surveillance system.

“It was going to be his word against theirs,” Yarborough said. Further complicating the case was the fact that police officers noted in their crash report that Keavney told them he was coming from a different bar called Jack’s Place, which is near Shooters.

“We think Mr. Keavney may have been there [at Jack’s] at some earlier time,” Spann-Wilder said.

Eurie also named Jack’s in his complaint, which the bar failed to answer, causing it to be found in default. After some wrangling with Jack’s insurer over coverage, the insurer’s errors and omissions carrier agreed to pay $312,500 toward the settlement.

“I hope this is a wake-up call to businesses that serve alcohol,” Spann-Wilder said. “Their desire to profit can really turn into peril for an unsuspecting motorist.”

Attorneys for Shooters and Jack’s Place did not respond to interview requests. 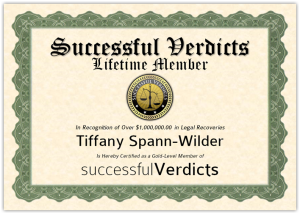